I was alerted to a post on Facebook a few weeks ago. The post was from an American Nephrologist by the name of Suzanne Humphries. I have noted her views on vaccination before and she even graced our fair city with her presence to appear as an ”Expert witness” in a custody case involving vaccines. The case was resolved, but not to her liking, I might add. Anyway, the post said:

What strikes me as odd is that she would ask for info that is freely available. Google does a decent job of translating Romanian and relevant info on outbreaks in Europe are available on the ECDC Website.

Being the helpful person that I am, I replied and provided relevant info. The majority of the sick and deceased were indeed unvaccinated.

I checked back the next day, only to find that my post had been deteled and I had been banned from further commenting. Meanwhile others had posted pretty much the same info as I had: 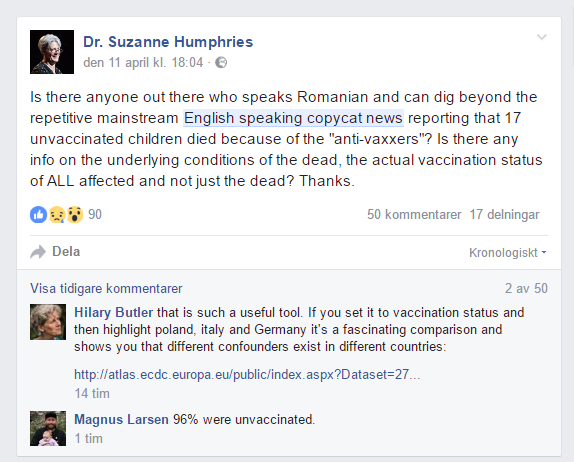 Next day.. Guess what. Magnus’ post had disappeared, but there was another:

This time from a journalist in Romania. Next day that was gone as well. I then contacted Hilary and asked her to ask Suzanne. The answer I got was that Suzanne has ”helpers” that helps her moderate the discussion. By looking at other messages I get the impression that only messages that contradict Suzannes  views on vaccination are deleted. Other messages, no matter what are left as is. This fact has been noted by other posters as well:

Interestingly enough the following day Magnus’ message reappeared and Suzanne wrote a reply. No other messages were undeleted though. In the conversation between Magnus and Suzanne, I found this absolute gem:

Yes, you read that right. According to Suzanne Humphries there is no point in protecting immunocompromised persons as ”they will die anyway”. This view of humanity bothers me quite a bit. There are not ”just a few” people living ordinary lives after transplantation. In 2014, 17,107 kidney transplants took place in the US. Patients with transplants kan live long and happy lives, but will need to take medication that suppresses parts of their immune system. That makes them more suspectible to measles.

Now, I am not suggesting that these ”not so few” would be the primary reason for vaccination. Measles can be a nasty disease. Granted, most or 75-80% manage measles just fine, apart from an imparied immune system for up to three years, but about one in five will have complications that can lead to life-long squelea. Measles has always been ind will continue to be a nasty disease, until we manage to eradicate it, something that is quite doable, given the fact that the measles virus is pretty stable and has no non-human hosts.

So, in essence, you vaccinate against Measles to get protection against a disease that can cause major harm. That is why you do it. That you at the same time protect infants, the sick and people where the vaccine does not give immunity (about three in 100) is just a bonus.